By Denise Weaver, Special to The Mercury

Back to News, Magazines, Catalogs & Journals 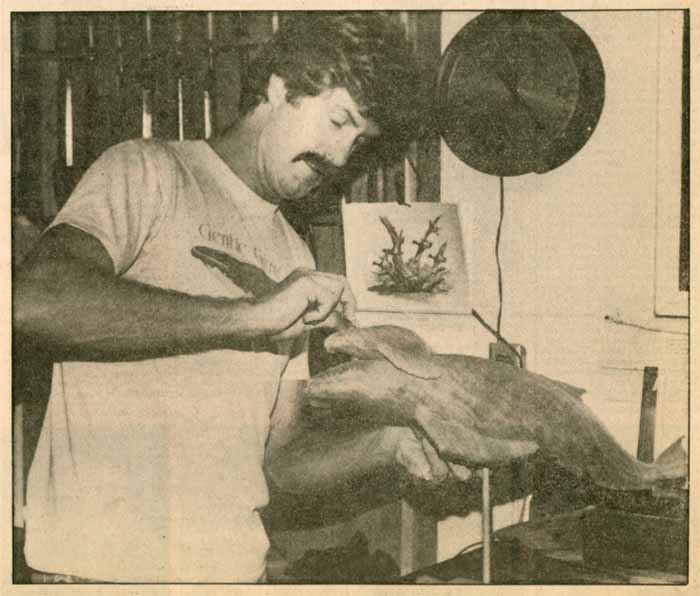 A wooden whale sculpture with a gallery price of $16,000 will be exhibited by Pottstown area sculptor and furniture designer John C Jackson in American Contemporary Works in Wood 1985. Sept 20 to Oct 20.

Jackson is among 85 artists from throughout the United States whose works will be featured at the Dairy Barn Southeastern Ohio Cultural Arts Center, Athens, Ohio, which is listed on the National Register of Historic Places.
Jackson, of 951 W. Cedarville Road, North Coventry, considers himself a naturalist and tries to portray all 27 varieties of whales as correctly as possible.

“It is a small market reserved for the very rich.” Jackson said of his whales. “The whales have a highly refined finish. Every detail of the animal is compulsively done They are all hand carved and finished to the ultimate end.”

He said one third of his business comes from commissions to make whales for private collectors. This part of his business has supported him for the past four years.
Jackson began carving whales in 1981 while teaching sophomore woodworking majors at Philadelphia College of Art, Philadelphia. He received his bachelor’s degree in crafts and woodworking from the same school in 1970.

“Whales became a way of life.” Jackson said. “I got away from doing one of a kind pieces of furniture.”

Jackson said he likes making whales because they don’t need to be used for anything. “The whale is non utilitarian and sculpture.” he said.

Whales are a method of expression.” he noted. “The whale is the largest and most magnificent animal. Whales have a benign and incredibly graceful nature. They think, reason, and communicate.”

When he is carving a whale he treats it as an individual. “Each whale is significant unto itself. I try to bring out the character and the beauty of each one.”

The sculpture he is working on now, “First Breath,” is a sculpture of a mother whale pushing her baby to the water’s surface for his first breath of air. When completed the work will sell for $3,500. 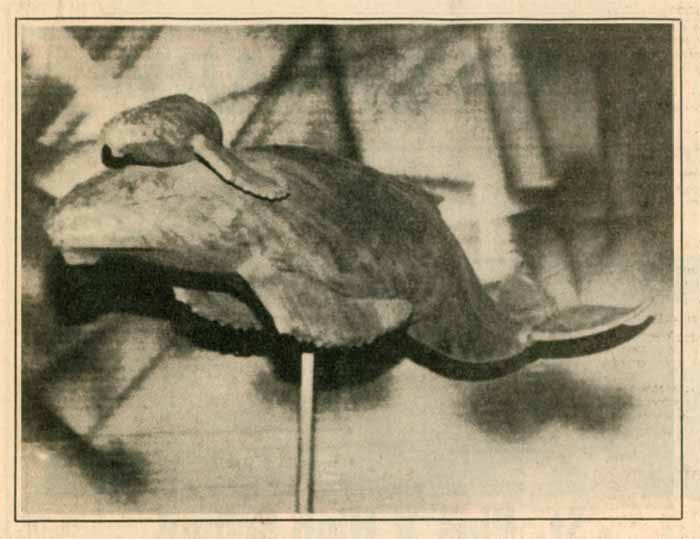 Jackson said he is content to let the whale be suggested by the wood “I take inspiration right from the wood. I search for pieces with a lot of swirl and motion in the grain. The grain determines the type of whale, its sex. and its movement.” he said.

Jackson works almost entirely with black walnut because it is the lightest of the hard woods and is easiest to handle.

“I only use air-dried pieces of black walnut and prefer that it be air dried tor 40 years.” Jackson said, noting he likes to use wood from old buildings and farmhouses in this area.

After he has selected a piece of wood he draws the figure onto it and cuts it out with a power tool This is the only time he uses a power tool.

“I have more control working with my hands and it is better for the wood. Wood is a temporal medium and it doesn’t last forever but it can if treated right,” he stated.

From there he “relieves the mass” by carving with heavy gauges, and then carves the details with smaller gauges.

Then Jackson sands the whale with three grits of sandpaper and fine files The whale is finished with a marine finish called water lox. Additional sanding and a coat of wax complete the process.

“I have always been interested in whales and like being part of a movement to preserve whales. I have a desire to educate the young about the importance of whales. The sculptures give an example of beauty in the world,” he said.

“Al Giddings, most notable underwater photographer and host of the NBC series ‘Ocean Qeust,” is very interested in my whales and ways they are very anatomically close,’” said Jackson.